Age proves to be no barrier in Lanchester 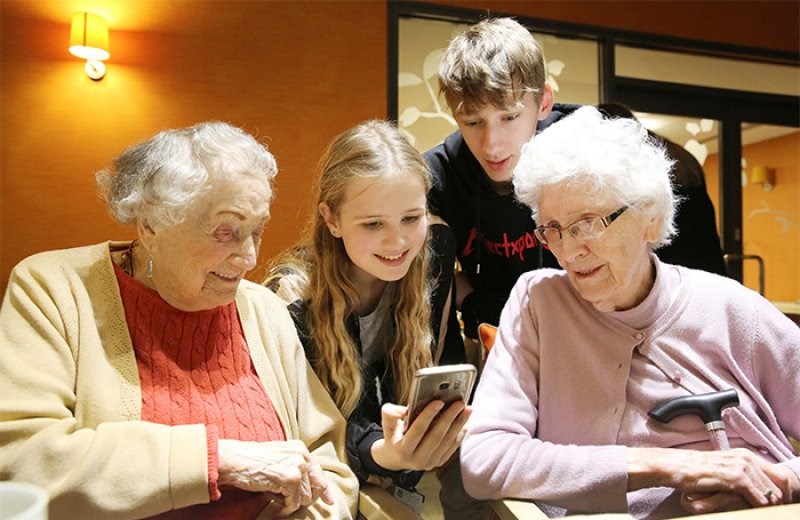 Doubts and assumptions were put to one side as friendships were formed between the generations at an inspiring project held in Lanchester, County Durham.

Karbon Homes’ Ageless Project brings together young and old people to increase understanding between the generations.

The 10-week project linked up a retirement community with a school to allow discussion of a wide range of topics with the aim of increasing the understanding between the generations, challenging each other’s preconceptions, increasing knowledge and establishing friendships that will hopefully continue with future social events.

Students from St. Bede's Catholic School and Sixth Form College, which is located only a 10-minute walk from Karbon Homes’ Lynwood House scheme in Lanchester, discussed topics such as money, jobs, housing, relationships, food and IT.

The Ageless Project is funded by MGM Ltd and delivered by Continuum CIC as part of Karbon Homes’ Unlocking Social Value Project. The initiative encourages Karbon’s contractors to contribute time and money to the local area where they are working. MGM are working across the Derwentside area to carry out structural work to some of Karbon Homes’ properties and were willing to get involved in the project to give something back to the local community.

Lynwood House residents, John and Carolyn Cook have really enjoyed being involved. John said: “A lot of the residents were a bit dubious at first but we have all thoroughly enjoyed it. It has been very worthwhile and everyone was looking forward to Monday afternoons. The children who came to visit us were excellent.

“There is a preconception that teenagers are trouble but the pupils who came to visit us were hard working, polite and very interested in what we had to tell them.

“They learn about our history in books but it’s not until they talk to people who have experienced living in the war that they really understand it. They thought they knew but when we told them we had no central heating and outside toilets, it really brought it home to them.”

Sixth-form pupil Beth Gibbon, 16, from Stanley said: “This project has given me a real insight into how life was when they were my age. It has been an experience to understand how they got over some of their barriers. Our childhoods are similar and while we stress about exams, they were stressing about getting a job.

“I formed a really close bond with the residents at Lynwood House and in particular, Mr & Mrs Cook who told me they have been married for 47 years. That is just unheard of these days.

“They kindly showed us around the building and in particular the IT suite which is really impressive. Their perception of the internet was bad and they only associated it with what they hear in the news about cyber bullying but once we explained the benefits and how it is used for areas such as science, discoveries and new technology, they really embraced it.

“We’re going to keep in touch and try and get everyone together and organise a bingo night.”

Michelle Graham, Employment Initiatives Officer at Karbon Homes, said: “The Ageless Project is a great initiative to bring together different generations within our communities and for them to share experiences and knowledge.

"We are once again very grateful to all our partners for delivering these sessions at Lynwood House. Feedback from the pupils at St Bede's Catholic School and Sixth Form College has been really positive and they are keen to continue visiting the residents. The project has brought together new friendships and a real insight into how different it is to live now compared to past decades. As well as highlighting the differences between the generations, it has also shown how much they have in common.”

A celebration event was held at Lynwood House on Monday afternoon where the pupils and residents were presented with certificates and reflected on what they had learned.

The next Ageless Project will be held at Derwentdale Court in Blackhill at the end of January and Karbon Homes and Continuum CIC are looking for both young and older people to take part.

To take part or for more information about The Ageless Project, please contact Jeanette Harold on 07872 058 175 or email jeanette.harold@continuumcic.co.uk