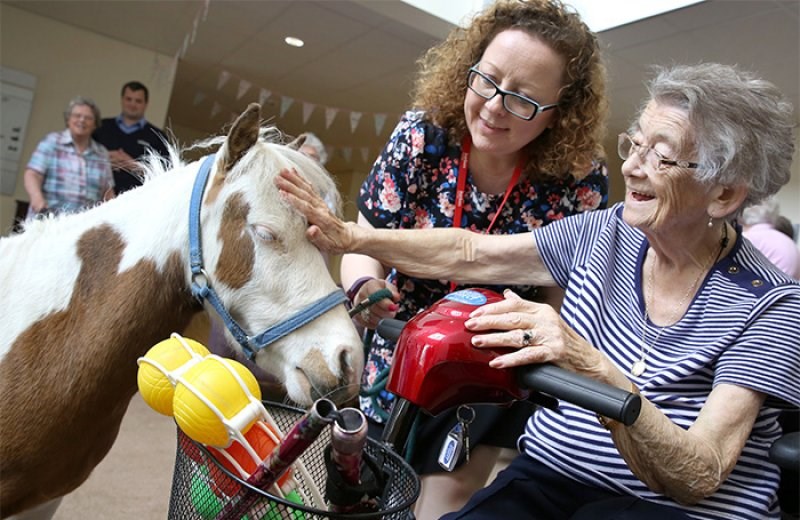 The residents of Weavers’ Court were horsing around this week, when an American miniature pony named Poppy popped in to see them.

Activities co-ordinator Liz Pratt had arranged for the visit from three-year-old Poppy who is owned and cared for by KL Pony Therapy, based in Darlington.

Poppy visited every floor of the building – even travelling in the lift.

Weavers’ Court is home to more than 60 older residents, some of whom have physical disabilities, and some have dementia, so a visit from Poppy can prove really calming and therapeutic.

Liz said: “You could see the pleasure on people’s faces. The visit of a pony, or other animals, can spark memories and reminiscence, which can be a great way to build friendships. The relaxing nature of petting an animal can also be good for people’s physical health, helping to lower their blood pressure, for example.

Katy Smith, owner of KL Therapy, previously worked in a care home herself. She said: “When any animal, especially ponies, were present or the residents could stroke, talk and just be around them, I found the reaction from the residents was so positive and good for them, especially those with poor mobility, co-ordination, the partially sighted or those who suffer from depression or anxiety.”

Liz added: “We like to ensure a varied and stimulating programme for our residents, and when we saw the chance to bring a pony into the building, we couldn’t say no.

“Poppy proved a big hit with all our residents. She has such a placid personality, and was never stressed by all the attention she received.

“We already had regular visits from a friendship dog, and now poppy has also proven very popular.”

Weavers’ Court is an Extra Care scheme located on Weavers’ Way in Alnwick. The building contains 58 apartments, some rented, some owned through a shared equity scheme, which provides its residents with as much support as they need to live an independent life.