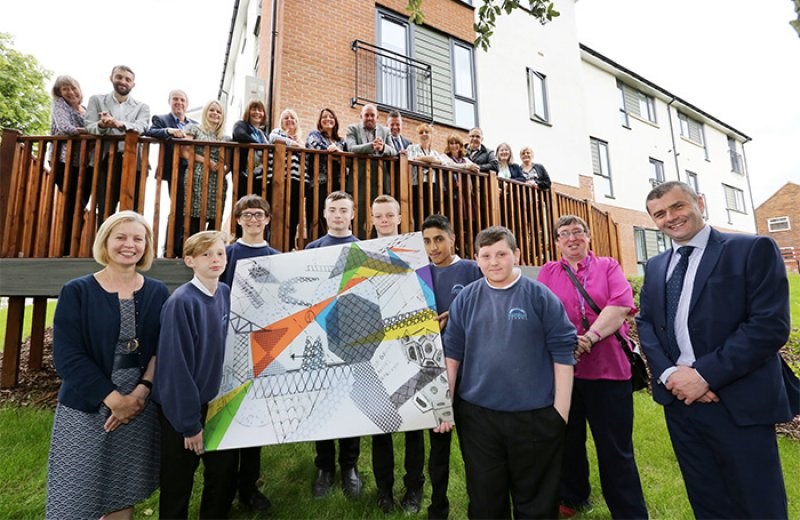 The finishing touches have been applied to the high specification Sherringham House in Kenton, Newcastle – and now the partners behind the building have unveiled an impressive new artwork created by students from a local school.

Our £1.5m building has been developed in partnership with Newcastle City Council.

The new building, constructed by Gus Robinson Developments, contains 10 two bed flats, and five one bed flats, and has been designed to provide specialist apartments for supported living.

Gus Robinson Developments commissioned a piece of artwork from students at Kenton School, to be displayed at Sherringham House, and the firm’s Brian Rose has been working with them to bring the project to fruition.

Adnan Khan, 14, was one of the students behind the artwork. He said: “We had been learning about artists like Kim Schoenstadt and Patricia Kane in school, and we had workshops with Gus Robinson, and that all led to us collaborating on this piece of work.

“We used different techniques – collage, some annotations, photography, to come up with the final piece.”

Sherringham House forms part of our regionwide development programme which will see the building of 2,500 new homes over the next four years.

Michael Farr, development director at Karbon Homes, said: “This building provides so much more than just the ‘bricks and mortar’ of new apartments. Sherringham House has been built to create a real community, where all the residents can feel at home, live independently, but also be able to benefit from support on site, whenever they need it.

“This building is just one example of the supported housing projects which Karbon Homes provides across the North East, and we are very proud to be one of the region’s leading developers of this specialist type of accommodation.”

Brian Rose, technical co-ordinator at Gus Robinson, said: “We felt this was a fantastic opportunity to implement a long-lasting link between the community and the building, while adhering to the students’ course programme.

“Working closely with the school, we were able to collaboratively produce a striking focal point for the building, its users and visitors. The final piece highlights how much this project captured the imagination of the students and demonstrates Gus Robinson Development’s passionate approach to social housing and local communities as a whole.”

Sheila Errington, Director of Care Services for St Cuthbert’s Care, said: “Everyone at Sherringham House was thrilled to be presented with this unique artwork and we would like to thank everyone involved for giving our residents such a warm welcome to their new homes.”

The development of Sherringham House is one of several affordable schemes developed by Karbon Homes across Newcastle in recent years, with more in the pipeline.