History comes full circle for Fred in his new home 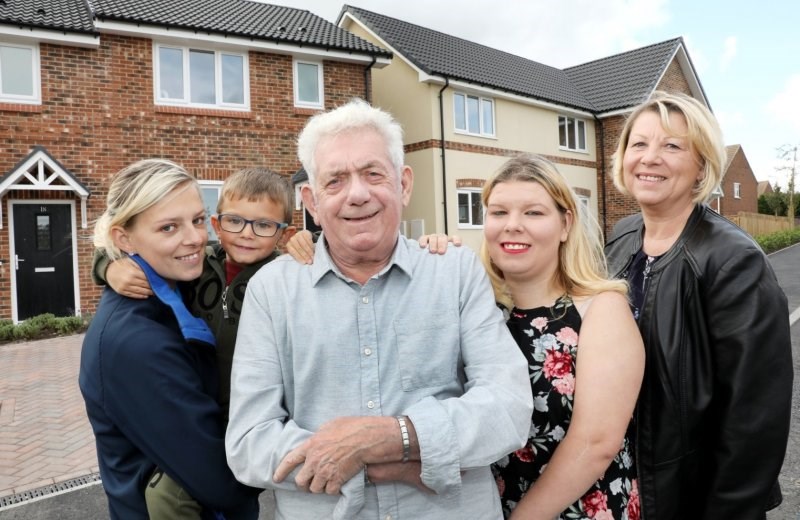 Fred Dowson is one of the lucky new residents to have moved into a new £2.5m development of 24 affordable homes in Shiney Row, near Sunderland.

The 77-year-old great granddad has a long history in the village, and as a young man worked as a bricklayer on the storage buildings which once stood where his new home has been built.
Karbon Homes has worked with main contractor Gus Robinson to build 18 family properties, plus six one-bedroom flats, along with parking and landscaping on the former industrial land off Hunter Street in the village.
The 1.35-acre site, which had remained vacant and derelict for several years, had become a focus for anti-social behaviour and fly tipping. The Fire Service had to be called out regularly to tackle small blazes.
Karbon acquired the site from its former owners, and the development then saw some derelict garages and sheds demolished.

Zoey Hawthorne, assistant director of development delivery, said: “This was an important site for us to develop, tidying up a piece of land which had unfortunately seen fly tipping and vandalism in recent years.

“We are really pleased to have completed this development of smart new affordable homes.
“It’s been great to be involved in a project which has been welcomed by local residents, re-integrating this site into the local community.”

Steve Bell, managing director of Gus Robinson, said: “It’s been great to see the transformation of a brownfield site into high quality homes for local people. “Throughout the development process, local residents showed a keen interest in the scheme and were really supportive of our proposals.

“The whole team at Gus Robinson Developments worked hard with our partners at Karbon to create not simply new houses, but a place where people would be proud to live and call home. I think we succeeded at Foundry Close.”

The development has been welcomed by the residents of neighbouring properties.
Ann Brown, 71, has lived on Hunter Street for more than 40 years.
She said: “The new houses are brilliant. It makes such a difference to the area. It was absolutely horrendous before, shocking.
“We had kids going in there, there were fireworks and fires – the Fire Brigade were always round here.
“But now the houses are finished, it’s a pleasure living here. When you drive round, lots of people comment on it.”

Moving into his new ground floor flat on Foundry Close had a sense of déjà vu for Fred Dowson.
Mr Dowson, 77, spent his working life as a bricklayer, and aged 25 built garages and sheds on the site where his new home now stands. He worked for the Stark family who previously owned the land and operated their businesses there.
Fred went on to work all over the country – and in Germany and Holland – but always came back to Shiney Row.
He and wife Maureen moved into a house owned by Houghton le Spring District Council in 1973, just a stone’s throw from the Stark family’s headquarters, and lived there for 45 years, raising five children - Julie, Edward, Anthony, and twins Brian and Kevin.
But Maureen sadly passed away five years ago, his five children all have their own families to look after, so he’s decided to move on.
Fred, 77, said the time was right to move into a small, more easily maintained property, but still close to his children, 10 grandchildren and 8 great grandchildren, who all live locally.
Mr Dowson said: “It was 1973 when we moved into our house, and we brought our family up there but that house was too big, now it’s only me.
“The new flat is beautiful. My daughter was a bit dubious about me moving, but when I brought her along to see it, she was over the moon with it. I’ve done the right thing.
“It will be a big change for me – but I can see Penshaw Monument out of the bedroom window, so I will feel right at home.”