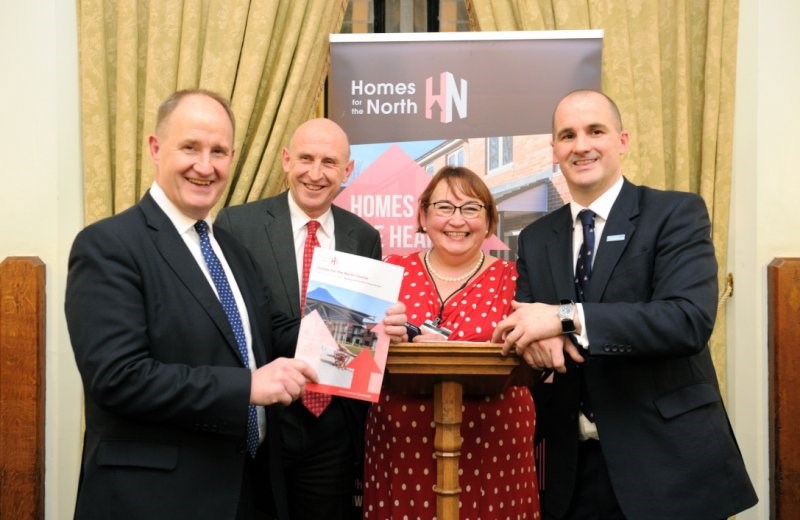 Homes for the North, an alliance of the 17 largest housing associations across the north of England which includes Karbon Homes, has launched an ambitious charter to boost northern economic growth prospects.

Both the Minister for the Northern Powerhouse and Local Growth Jake Berry and the Shadow Secretary of State, John Healey, welcomed plans to put good quality homes at the heart of the northern growth agenda and to integrate housing and transport infrastructure more closely.

They were responding to a new policy charter from Homes for the North, entitled “Rebalancing the Economy: Building the Northern Homes We Need”, which sets out out four key asks that could help boost the northern economy:

1. A regional housing target to build at least 50,000 homes per year in the north

2. A requirement that local authorities in the north align their Local Industrial Strategies with housing supply plans

3. The establishment of a powerful pan-northern body charged with ensuring that housing and infrastructure are planned together over the long term

4. A new type of ‘renewal deal’ between government, combined and local authorities, and housing associations that would focus on, combining existing investment streams in housing, transport, and local economic development

Speaking at an event organised by Homes for the North and hosted by Kevin Hollinrake MP, Mr Berry said: “In three years since launching the Northern Powerhouse Strategy, we grew the North’s economy by £22 billion. That is a step change in growth for the North’s economy. A similar period before 2010, albeit at the time of an economic crisis, was £4bn. £22bn versus £4bn is delivering on our ambition for the North.

“And finally, we acknowledged in the Northern Powerhouse that it is all about human capital as well. Crucially, human capital is about creating the homes that the North needs, and homes that people want to live in. And that is why I’m so pleased with the ambition of this report today.

“This report demonstrates what is at the heart of the Northern Powerhouse. It is about cooperation, and one of the most eye-catching things in this report is about creating that housing cooperation group across the North of England.

“Now the government will take the report away and look at it, but what I would say, my plea to you is – you do not need the government’s permission for all of us in the North of England – local government leaders and Mayors, members of Parliament and housing providers – to come together and work together to build and plan for the homes we need. So absolutely we will respond to the report, but let’s not wait for the government’s permission to do anything. Let’s get on with it. We are for the North, we are from the North and we want to create the homes we need.”

The charter comes at an exciting time for the North, with the Transport for the North Board set to approve the Strategic Transport Plan and Investment Programme, forming statutory advice to Government, outlining a 30 year pipeline of transport interventions that will transform connectivity across the North.

Homes for the North and Transport for the North also used the event in Parliament, which was attended by 30 cross-party MPs from across the north, to unveil plans for a major new research project which will set out how out how strategic investment in housing can complement planned investment in transport and infrastructure, bringing major benefits for the northern economy.

The research, which is being undertaken by a consortium led by economics consultancy the Centre for Economics and Business Research, is expected to be published in the summer. It will build on the Northern Powerhouse Independent Economic Review published in 2016, which revealed how pursuing the Northern Powerhouse Vision could deliver a ‘transformational economic growth scenario’, including 1.5 million new jobs and an additional £97 billion in GVA by 2050.

Carol Matthews, chair of Homes for the North, said, “Previous research reveals that the North needs 500,000 homes over the next ten years just to keep pace with current demand. A new approach is needed to get the good quality homes we need across the region. We hope that our Charter – and our work with Transport for the North – will provide the blueprint for achieving that potential. We look forward to working with central and local government to change and ensure that the north is the absolute best it can be.”

John Healey MP, Shadow Secretary of State for Housing, added, “The housing crisis is a national crisis. Home-ownership has fallen across the north of England since 2010, and there is visibly rising homelessness in almost every town and city. Ambitious northern areas want to build for the future, but Ministers are making it harder for them to do that. I hope this research will bolster the case for more investment and more decent, affordable homes for the north of England.”

Kevin Hollinrake MP, a member of the Housing, Communities and Local Government Select Committee said, “I am one hundred percent behind any initiative which will transform our economy in the North and enable us to fulfill our huge potential. Ever since I was elected I have been campaigning for more funds to improve our infrastructure, particularly for transport.

“In the Summer I wrote to the Chancellor, in a letter signed by 80 MPs and Peers, urging him to set aside £100 billion to transform our rail and road network. This much-needed investment will transform the regional economy and could lead to as many as 1.5 million new jobs. So, alongside this, we absolutely need to prepare to build more houses in the right places to encourage people, especially the young, to make their homes in the North instead of heading down South.”