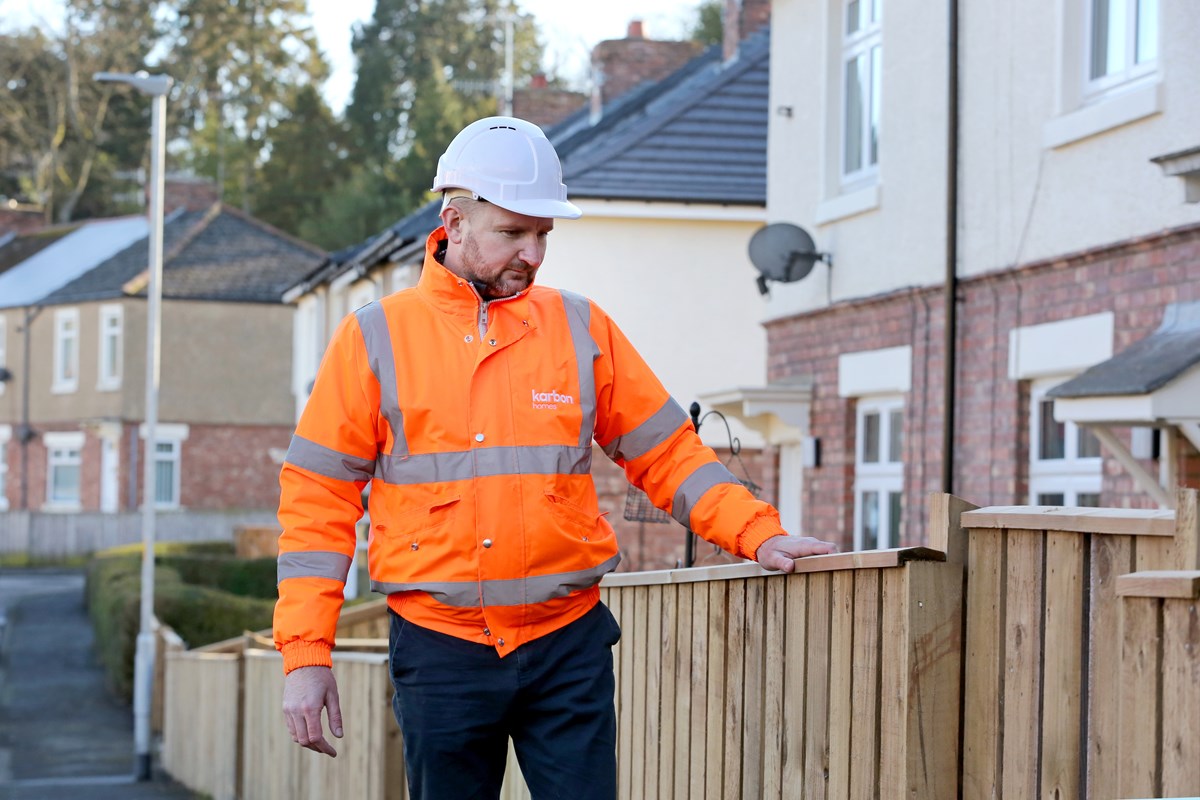 As we put the finishing touches to a huge programme of renovations in five Karbon communities, we ask Nathan Lowes, Investment Team Manager, to tell us how it’s gone.

Q. Tell us a little bit about this programme of investment Nathan.

A. Over the past 10 months we’ve been busy making improvements worth £1.8million to 236 houses and bungalows in Widdrington, Morpeth, Hadston, Gosforth and Chester-le-Street.

The homes were built in the 1950s and 60s so were in need of some TLC to keep them watertight, safe, secure and looking their best. We decided to roll all works into a single programme to minimise the possible disruption to customers. That way, we’d get it all done at once.

Q. What kind of improvements have been made?

A. We made structural repairs to homes, as well as improvements to roofing, fencing and boundary land. The work each home received depended on the home itself, some properties were re-rendered, some had new canopies installed and some received lintel replacements depending on what was necessary. See opposite for examples of just some of the work carried out. We also picked up some health and safety defects in paths and gardens while on site. Our contractor RE:GEN Group also organised a community clean up – arranging a series of skips to be placed at Widdrington, so all customers and private residents could easily get rid of any unwanted waste. This came at a time when access to waste disposal sites was difficult for residents because of Covid-19 restrictions and proved really popular. It meant that many large items of furniture and electrical goods were cleared away from gardens and drives.

Q. Did Covid-19 have an impact on things?

A. Yes, it certainly kept us on our toes! Changes to how we interacted with customers and each other when working on site were fairly easy to make but the main issue was the availability of certain materials we needed. Supply chains were badly affected, with sand, roofing tiles, fencing and concrete all causing us issues at some point, though we managed in the end.

Q. Are you pleased with how it went?

A. Yes, we are really pleased with the results and more importantly, the feedback from customers has been
very positive. The estates are noticeably improved.

Q. Finally, did anything interesting happen along the way?

A. We were surprised to come across two World War 2 air raid shelters at two homes at St Marys in Morpeth!
They looked like outhouses, propped against the outside wall, with really thick concrete roofs. Although they weren’t in our original scope of works, we found out that customers were using them for storage and we thought it important to preserve such useful and historic structures. So, we carried out a structural report and arranged to fully renovate them, including brickwork repairs, full re-rendering and installing new roofs. They are now really smart and compliment the work we have done to the main homes.

"I’ve lived here since 2013 and I wouldn’t live anywhere else now. I’ve had a new roof, pointing, wall
ties, rendering and painting. It’s made such an impact. The whole place looks refreshed and really
cared for. "
Jimmy Gray, Widdrington

"The workmen were really friendly and sociable and we were kept well informed of what was happening. It was well worth the little bit of upheaval and mess while the work was done. It’s lovely to see the street looking so nice and I can’t wait to get back into my garden to really appreciate how good it all looks from outside."
Alison Bell, Widdrington