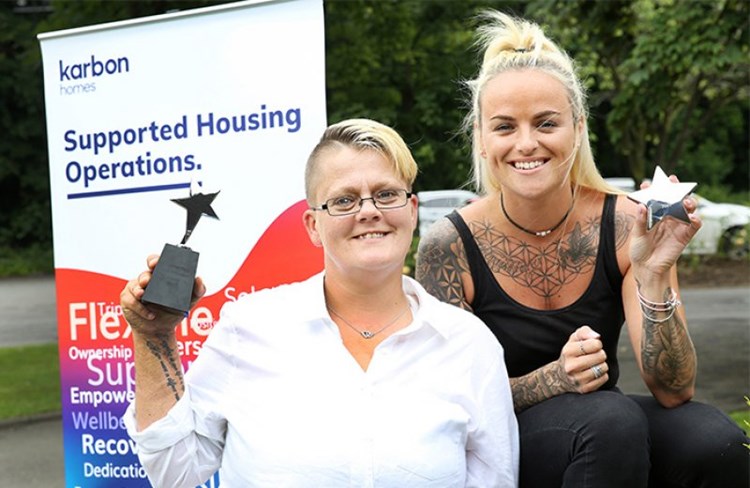 The outstanding achievements of service users supported by Karbon Homes have been celebrated at a moving awards ceremony.

The ninth annual Star Awards saw the winners of nine different categories revealed at the ceremony held at the Newcastle Marriott Hotel Gosforth.

The awards celebrate and recognise service users with a primary diagnosis of mental health who have shown great strength on the road to achieving better mental health, while overcoming life’s ups and downs.

The event also provides an opportunity for service users to thank their support worker or staff member at Karbon Homes who have worked alongside them as they have turned their lives around.

The event, which is organised by our Supported Housing Operations Team, presents awards in nine categories ranging from good neighbour to outstanding achievement.

This year’s outstanding achievement winner was Kath Miller. Since receiving community based support from Karbon Homes, Kath has reduced her support from 24 hours to eight hours per week and has significantly reduced her admissions to hospital. Supported by assistant support worker, Jess Havelock, Kath is frequently taking part in sport and her physical health is benefitting as a result.

Kath said: “I was absolutely gobsmacked, I didn’t think I would win. When they read my name out I was shaking and I was speechless.

“It really is down to the support of Karbon Homes that I am here today, I couldn’t have done it without them.”

Catherine McDonald was recognised for ‘making a positive contribution’. She was nominated by assistant support worker Linda McDonough after turning her life around and making a valuable contribution to the community.

Through the support she received from Karbon Homes, Catherine began to volunteer for Age UK and has now secured a job with them, working night shift at a care home and delivering care to the community.

She also completed the Race for Life in support of Cancer Research UK last year and is taking part in it again this year and has raised £100 in sponsorship. She said: “I am really amazed that I won this award as the other nominees’ stories were good. It was a lovely do and a great day out, I’m really glad I went.

“I lost my son two years ago and it’s a miracle I haven’t turned back, I’m really proud of myself and so are my family. The award has pride of place in my living room, I keep polishing it too.”

Another category winner was Philip Nelson who was recognised for being a ‘good neighbour’ after being nominated by his assistant support worker Simon Joicey.

Philip said: “I just wanted my neighbour to know that I was there to help out while they were in hospital.”

Jennifer Scott, Supported Housing Operations Manager at Karbon Homes said: “The Star Awards are always one of our favourite events of the year. The awards are a great way for us to congratulate our stars and nominees for showing such great strength to achieve better mental health.

“We are extremely proud of our support service and these awards provide the perfect platform for us to thank the people who have worked alongside all of our stars and nominees.”

Other winners collecting their awards were:

The awards were attended by Karbon Homes staff, service users and key partners from local authorities.