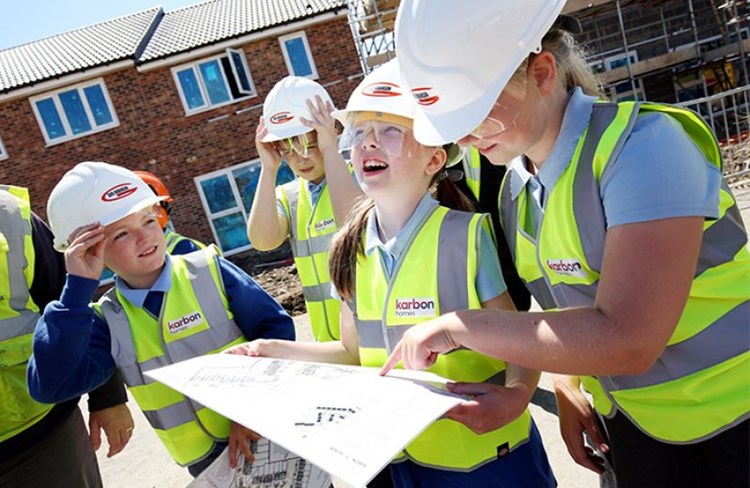 The history of docks and shipyards in South Shields has been the inspiration for these school children creating new artwork for a housing development in their area.

The children from Y5 at St Peter and Paul RC Primary School in Tyne Dock have been working on a project which sees them collaborating with community artist Neil Canavan.

Together they are creating artwork to be displayed as house numbers and an entrance feature to our new £4m affordable housing development on the site of the former St Mary’s CofE Primary School on Lord Nelson Street.

The development will be made up of 31 family homes alongside six bungalows for older residents.

So while our contractors Gus Robinson Developments get on with building the new homes, the children are working with Neil Canavan and Lewis Rimington from Karbon Homes to give the site an artistic flourish, in time for completion in Spring 2018.

To help the children gather inspiration as they’ve worked on their art, they have had the chance to tour the development site where the houses are being built, as well as visiting the Port of Tyne, Neil’s studio and the Discovery Museum in Newcastle.

Lewis Rimington, community development officer for Karbon Homes, said: “We’ve been so impressed with the imaginative approach the children have taken – and their skills in bringing their ideas to life.

“Clearly the history of this area really resonates with the children, and while there are not the number of cranes and shipyards that there used to be, that industrial landscape is still prominent in their minds.”

Ellen Hagan, technical manager with Gus Robinson Developments, who escorted the children on site, said: “It was a pleasure to take the children for a look around the site. They were very inquisitive and very interested in the different build stages they could see on site.”

Kanwar Singh, aged 10, one of the children involved in creating the artwork, said: “I’ve enjoyed the whole project, particularly designing the door numbers for the new homes and helping Neil (Canavan) design the entrance sign.”

This new development is just our latest to be brought forward in the South Tyneside area.

Elsewhere in the borough, we recently completed 18 new flats on Temple Park Road in South Shields, and work has not long been completed on a project to build 11 new homes in Boldon Colliery, adding up to a total investment of £4m.

A short distance from the Tyne Dock site is the Cleadon Park regeneration scheme where, between 2008 and 2015 we delivered 246 affordable homes in partnership with Bellway Homes and South Tyneside Council.

We also have a new project in the pipeline for more affordable homes in Boldon. These homes form part of a regionwide development programme which will see Karbon build 2,500 homes over the next four years.