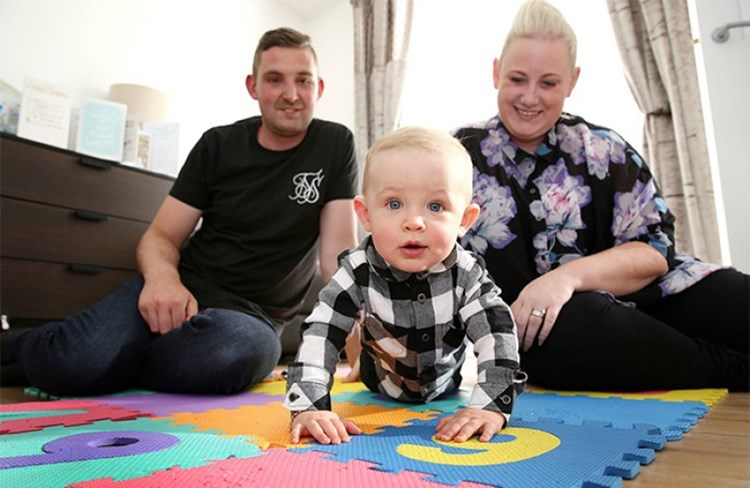 This young family is settling in well at their new two-bedroom home on a £1m Karbon Homes development in Teams, Gateshead.

Kayleigh Hood, 26, and her partner Stephen Willoughby, 28, have just moved into their new property with their 9-month-old baby son Preston.

The new homes have been built in partnership with Gateshead Council, in response to continuing strong demand for affordable homes in the borough.

Karbon owns and manages well over 700 homes in the borough of Gateshead.

Kayleigh, a dental manager, said: “It’s beautiful, a nice little home – but big enough for us. We were in a private rented property in Lobley Hill, so this is a good move for us.

“It’s more energy efficient than our last home, so the bills are a bit cheaper, and the location is a bit more central.

“We’ve got family and friends nearby, and both sets of grandparents are close, which is great for Preston.”

The central location is also helpful for Kayleigh and Stephen, a storeman, commuting to work each day.

Kayleigh said: “We’ve been impressed with the quality – it’s all finished to a really high standard.”

Lea Smith, development and regeneration manager for Karbon Homes, said: “We know there is real demand for high quality, affordable homes in Gateshead. This is a development which meets the needs of local people – with both family homes and bungalows for older residents.

“Karbon Homes is committed to building 500 new homes regionwide each year to help tackle the housing crisis in the North East.”

The new homes on Victoria Road have been designed by HMH Architects and consultants Portland Consulting and Lumsdon Wood also contributed to the scheme’s success.

Other new, or recently completed Karbon Homes developments in the area, include: