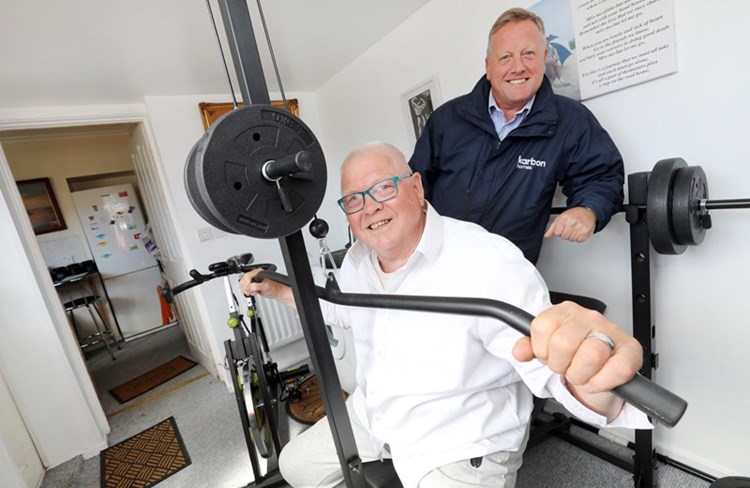 A 75-year-old fitness fanatic has converted new-found space in his home into a gym thanks to a recently completed programme of work by Karbon Homes.

Great-grandad Joe Grimes of Murray Terrace had the idea to create his own home gym when he was told that Karbon was planning to convert over 40 coal houses into spacious new living spaces in the County Durham village.

Karbon Homes invested in the former single brick thick coal houses which were built at a time when coal was the main fuel used to heat the bungalows in Dipton near Stanley.

The works to the 3m x 2m spaces cost a total of £92,000 and included insulating off shoot walls, plastering, electrical works and plumbing in a new radiator to create extended living space for residents.

With the programme of work now complete, most residents are using their new-found space as a dining/sitting area or for storage, but Mr Grimes had other ideas…

Mr Grimes likes to keep in shape and works out at least three times per week. He likes to spend time in his gym which includes a cross trainer, exercise bike, bench press and free weights.

The father of one who has a great grand-daughter, Sophia aged 5 with another great-grandchild on the way, has been told by doctors to keep active and busy after having heart problems in the past.

He said: “When Karbon told me about the proposed works that would be undertaken to my home, I knew immediately that I would use this space to create a gym so I can keep fit in the comfort of my own home.

“I lost my wife of 50 years earlier this year so exercising helps me to keep my mind off things and stay focussed, I enjoy it. The extended space has made a big difference to my home, I’m over the moon with it and I know my neighbours who have had the same work done are also pleased with their new living space.”

A total of 42 properties were included in the programme of works, which commenced in January and were completed this month. The works were completed to semi-detached and terraced bungalows at Tennyson Gardens, Coleridge Gardens, Delight Row and Murray Terrace.

David Graham, commercial investment manager at Karbon Homes, said: “As part of our planned maintenance programme, we converted the single brick outbuildings by creating usable spaces. This has provided residents with dining room or sitting space but has also created additional storage space for these bungalows. Feedback from residents has been really positive and made their homes much more habitable and sustaining.

“It’s lovely that Mr Grimes has been able to use his space as a fitness room and he’s looking in great shape at 75 years old.”