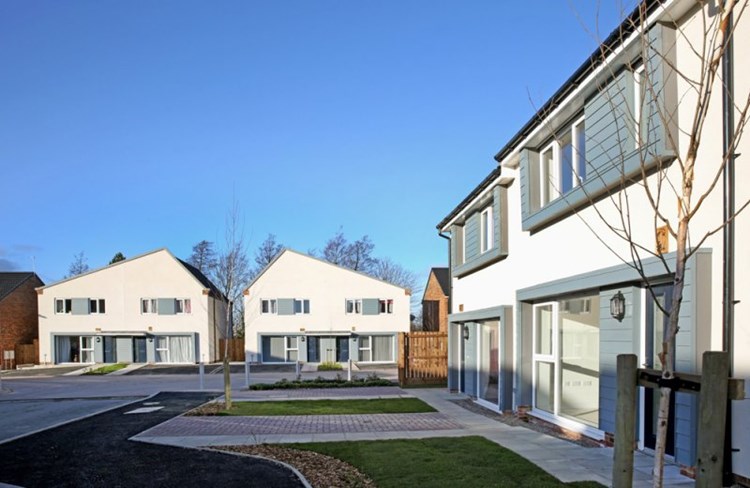 The first residents have just moved into this new £4m development of affordable homes on a prominent site in Tyne Dock in South Shields.

And local councilor Ed Malcolm was one of the first to get a tour of the estate, and meet some of the newly arrived residents.

Landlord and developer Karbon Homes has built 37 homes on the site of the former St Mary's CofE Primary School and the adjacent St Mary's Centre.

There are 31 family homes alongside six bungalows for older residents.

Stewart White, 46, has moved into a two bedroom semi-detached house on The Staithes with his 17-year-old daughter. He works in Sunderland while his daughter is at Sixth Form nearby.

He is delighted with his new home. He said: "I can't put my finger on just one thing I like - everything about it is quality. I get home and I sit there with a smile on my face. It's a beautiful house."
Mr White and his daughter were living with his parents in Jarrow, so it's been a positive move to get their own space.

Evelyn Adams, 65, had been wanting to move into a bungalow for some time, and finally got the move she wanted.

She said: "I've been bidding for bungalows for the last few years. I could not manage the stair in my old house.

"My brother lives over the road from here and he mentioned that Karbon were building bungalows near him."

It's been a big move for Mrs Adams, having been in here last house for more than 30 years, but she has a lot of family support in the area, as she is one of 17 siblings - she has nine brothers and seven sisters. She herself has one son and two grandchildren.

She said: "I'm settled now, and my son has seen how much I like it here."

The layout for the development uses the 'Home Zone' principles to ensure all the homes are easily accessible, and the site is pedestrian and cycle friendly, with traffic calming measures throughout.

Homes England (formerly the Homes and Communities Agency) has contributed £851,000 towards the total £3.5m cost.

The new homes were built by Gus Robinson Developments, designed by architects Norr Consultants and the design was approved by the North East Design Review Panel.

This new development is just the latest to be brought forward by Karbon Homes in the South Tyneside area.

Elsewhere, Karbon has recently completed 11 new homes in Boldon Colliery, and is working on another site with Gus Robinson Developments at Gordon Street near Chichester Metro station.

Meanwhile a short distance from the Tyne Dock site is the Cleadon Park regeneration scheme where Karbon owns and manages 246 affordable homes as part of the mixed tenure development built with Bellway Homes and South Tyneside Council.

Michael Farr, development director for Karbon Homes, said: "This is an important site for us, in a great location, and easily accessible for the main road into South Shields.

"We're really pleased to welcome the new residents into their homes.

"We have worked closely with South Tyneside Council and Gus Robinson Developments to bring forward another successful development and make a contribution to tackling local housing needs."

Councillor Ed Malcolm represents the Simonside and Rekendyke ward and also chairs South Tyneside Homes. He said:"This is a very welcome development and it is good to hear how much these new homes mean to people.

"We are committed to working in partnership to provide much-needed affordable homes across the Borough. With this latest development boasting great design and excellent transport links, these homes are certain to become popular with local people."