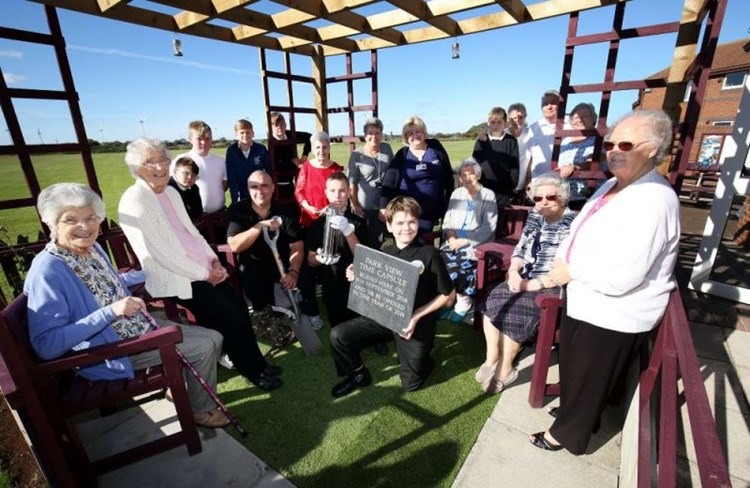 Local residents and school pupils have planted a time capsule to celebrate the completion of a garden makeover project in Lynemouth, Northumberland.

Throughout the summer, pupils from Atkinson House School in Seghill, near Cramlington have been building high raised beds, planting bulbs, laying a new patio, building a pagoda, laying turf, painting and weeding in the communal garden at Park View sheltered housing scheme off Park Road in Lynemouth.

Residents living at the Karbon Homes scheme, which consists of 37 one and two-bedroom homes for older people, are delighted with their new-look garden and have praised all the hard work that the pupils have been doing over the spring and summer.

‘The Tranquil Garden’ was officially opened by Lynemouth Councillor Liz Dunn and residents and pupils gathered at the scheme on Friday afternoon to celebrate their efforts and plant a time capsule, which includes messages and photographs of the work they have delivered.

Park View resident Edith Headley, 92, said: “It has been fantastic watching these boys working in the garden on the behalf of the tenants at Park View – they have worked their socks off. They have always been well mannered and polite when they are here, and the work that’s been done is unbelievable. All I can say is, it is wonderful that the younger generation want to put themselves out to help improve the lives of older people, and it has improved the view. Pardon the pun but we now have a view to die for and I would like to add that their teacher, Andrew Brotherton has been marvellous in his support for the boys - it’s all fantastic”.

Scheme officer Diane Leighton, said: “They’ve done a fantastic job and our residents have enjoyed seeing their hard work come to fruition. The garden has been transformed and our residents can enjoy sitting and relaxing in their new garden. This project has brought young and older people together and they have enjoyed each other’s company. They should be applauded for their efforts and we are very grateful to them and the school for doing this.”

Up to 25 pupils aged 11-19 have worked on the garden project and gained valuable experience along the way. Phil Forster, Acting Head Teacher at Atkinson House School, which helps pupils with social, emotional and mental health needs (SEMH), said: “The pupils have contributed well to this opportunity from start to finish and have created life skills for the future, increased their self-confidence, worked as a team and engaged with many residents. A Community Task Force has been developed to give pupils opportunities to make a difference in the lives of others, gaining skills practically and socially while meeting many academic targets. These skills have been evident in the project so far. We are really proud of the efforts from the pupils in the Community Task Force and look forward to continued success in any projects in the pipeline over the coming year. Thank you to the Park View residents for allowing us to be part of your home; it’s been a great journey!”

At the garden unveiling, Cllr. Liz Dunn said: “I hope the young people who assisted with the garden found the experience rewarding and positive and I would urge them to come back now and then to see just how it’s growing and evolving. One of the aims of Karbon Homes is to promote health and wellbeing and there is no doubt that this project will make a great difference to the residents here at Park View; it has transformed their garden into a real oasis, a peaceful and pleasant place for them to relax and reflect. It’s a great example of two very different organisations working together to benefit our community.”

The plaque was kindly donated by Bart Endean of Morpeth.