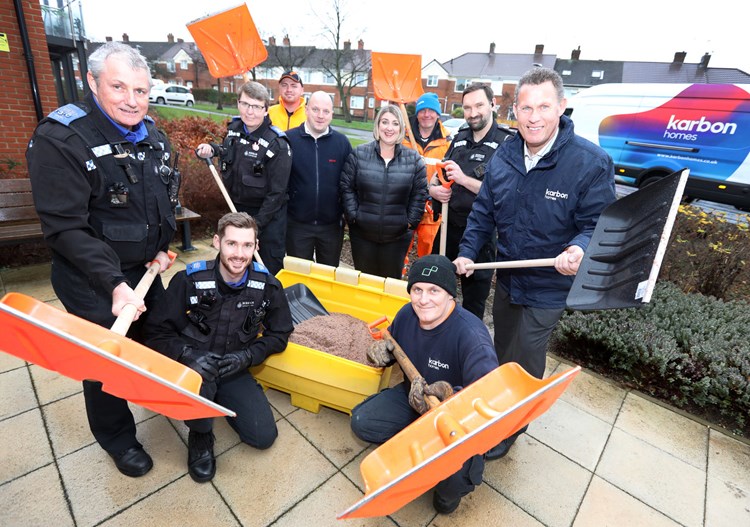 As temperatures continue to fall, the annual call has gone out for the people of North Durham to support the Snow Angels project, which helps support the elderly and vulnerable this winter.

Established in 2011, by PCSOs Adrian Richards and Christine Taylor, Snow Angels is a joint initiative between Durham Constabulary, and various partners including Karbon Homes, council wardens and other County Durham housing associations.

In the event of heavy snow fall, Snow Angels volunteers are called upon to assist in the clearing and gritting of footpaths in their local community.

Police will also be on hand to deliver essential food parcels to the vulnerable and elderly in the Chester-le-Street and Pelton areas.

Paul Hadden, Karbon Homes’ Community Connector for the Chester-le-Street area, said: “Many of our residents are elderly and vulnerable and it’s vital we make sure they stay safe and well this winter.

“During a cold snap last winter, one elderly woman was stranded in her home because her daughter, who was her primary carer and who visited her every day from York, couldn’t make the journey.

“When the Snow Angels were contacted and got in touch with this lady, she had none of the essential, everyday items in her home. The police dropped off emergency supplies and checked up on her and her daughter was contacted to reassure her that her mum was okay. This is just one example of how this scheme can really make a difference”.

This year, Karbon Homes has supplied extra salt bins at key locations across Chester-Le-Street, and these bins will be identified with Snow Angel stickers, together with relevant information on how to become a Snow Angel Volunteer.

Being a Snow Angel is easy – all volunteers need is warm clothing and a shovel. In the event of heavy snowfall they will be contacted and asked to help clear paths in their area.

PCSO Adrian Richards, of the Chester-le-Street Neighbourhood Policing Team, said: “We are always on the lookout for volunteers to be part of the Snow Angels team, to help and support our community through the winter months.

“We are hoping for a mild winter but now have everything in place to offer any vulnerable resident in Chester-le-Street and surrounding villages the offer of help, if needed.”

The contents of the food parcels have been donated by Batley’s Cash and Carry, which has supported the initiative for the past 6 years.

Assistant General Manager at Batley’s Cash and Carry, Paul Kinsleyside, said: “In the event of residents becoming isolated and in need of help, Batley’s are ready to assist.

We provide the food parcels containing essential items such as bread, milk, tinned food and anything else needed to see them through until weather conditions improve. We are more than happy to be involved in such a fantastic scheme which has in the past been invaluable to people in great need”.

The Snow Angels initiative will run throughout December 2019 until March 2020. Anyone wishing to volunteer should contact the Chester-le-Street Neighbourhood Policing Team on 101.