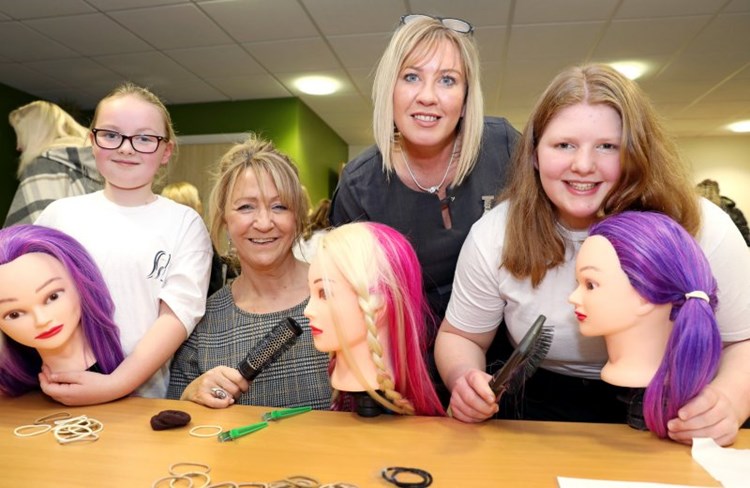 Mini Me Hair and Beauty Academy has taken its first steps into adult education thanks to a community grant from Karbon Homes.

‘Mini Me’s Jessica (left) and Alina (right) with Mary Ormston from Karbon (left) and founder of the Mini Me Hair and Beauty Academy, Trudy Johnston (right)

After landing £10,000 from Karbon’s Investing in Communities Fund, the academy which previously worked only with school children, has been able to extend its offering to adult learners, with the launch of a range of free health and beauty training courses.

Mini Me Hair and Beauty Academy is run by Trudy Johnston, owner of the Beauty Rooms in Prudhoe. It started out as a summer school for local children aged 6-16.

The academy’s success saw it continue as an after school club from its base in Karbon’s Extra Care scheme, The Manors, and it has trebled in size since its launch back in August 2016.

Trudy said: “The Manors is in the heart of an absolutely fantastic community. I’ve seen an awful lot of community initiatives taking off recently and I thought it would be brilliant to expand my Mini Me offer to adults in the area.

“To help make this dream a reality I applied for a grant from Karbon’s community funding programme and was absolutely delighted to be awarded £10,000.”

The grant from Karbon Homes will cover an 18-month period and as well as running courses at The Manors, Trudy will also run them from the No.28 community house in Hexham.

Trudy added: “The courses will follow the level 2 curriculum, giving students from Prudhoe and Hexham the opportunity to gain vocational and employability skills and build their confidence to move on to another step of their lives.”

Last Thursday, an enrolment event was held at the Manors where anybody interested could find out more about the courses on offer.
As well as support from existing Mini Me students, who were on hand to carry out demonstrations for members of the public, the launch also received support from Bridge, a North East employability hub, Novus Work, a charity which supports ex offenders back into education and employment, and Younique Products, an arm of the Younique Foundation which supports women who were abused at a young age.

Mary Ormston, Community Connector at Karbon Homes, said: “Around 75% of the current Mini Me youngsters live in Karbon Homes properties, which is exactly why we were so excited about getting behind Trudy’s vision of engaging with their parents and other Karbon residents as well.

“The adult courses that Trudy is running provide the students with real, recognised qualifications, and we haven’t funded anything like this before. When you see how enthusiastic Trudy is about it and how much she really cares about the community, it makes me really proud to know that Karbon has helped turn her dream into a reality, a dream that will have such a positive impact on people’s lives.”

If you’re interested in finding out more about the adult course on offer you can contact Trudy on 07841 866 501, or through the academy’s Facebook page, Mini Me Hair and Beauty Academy.