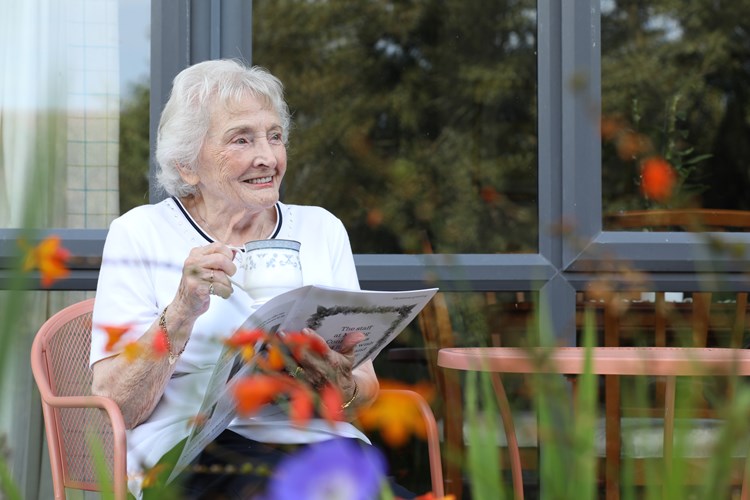 It’s Remembrance Day on November 11, when the nation comes together to honour the sacrifices of the Armed Forces and their families in the hope of a peaceful future.

We are grateful to our many residents who have played important roles in conflicts – both on the frontline and closer to home. We spoke to 90-year-old Alnwick resident Nora Walker about how she came to care for Britain’s wartime orphans.

“I still remember clearly the day war was declared over the wireless.

I was aged 11, living with my parents, three sisters and brother in Dunston, Gateshead. The area was at risk of bombing so children were told they’d need to be evacuated to keep them safe. My sister and I went to live at the farm of our favourite aunt in Bishop Auckland. We knew we were very lucky to go somewhere with people we loved. Other children were sent off to unknown places. The thought of them standing in lines, clutching their gas masks and waiting to be chosen by a stranger, terrified me.

Although I missed my parents, I loved being in my new home and school. Mine was not a typical experience of the war in that respect. But we were often reminded of the horrors that children were facing elsewhere. I was heartbroken by the photos in the newspapers of the children who were left orphaned and injured by the London bombings. I vowed I would help them and as soon as I left school I did.

I got an interview at the original Dr Barnardo’s home in Stepney Causeway, London, when I was 16. I took the train with my dad and we were shocked by the unworldly sight of the bombed-out streets as we travelled through badly hit areas.

I trained at a Dr Barnardo’s Staff Training School in Woodford Bridge in Essex. Sometimes we’d hear doodlebugs, which were basically bombs with wings. We’d rush to the window to see where they were, and we’d watch them fly until they ran out of power. Then they’d drop to the ground and explode and we’d run to hide under the table for shelter. It was very scary.

I absolutely adored my work and the children. I especially remember happy times with one little boy called George, who had a terrible scarred face from being burned. The little ones clung to us and we smothered them with love. We learned all kinds of things that would be helpful in tending to children who were orphaned, or had no family for other reasons.

Many has suffered terrible experiences or were living with physical injuries. We learned everything from psychology to domestic science. It was like a little village – there was a school, a swimming pool, a gym, and a hospital, all in the grounds. Boys and girls had separate homes in those days.

The children were very well cared for and life was made very happy and comfortable for them. I used to feel so proud of them when I took them on the bus to my parent’s house for tea on my day off on Sundays. I was only a teenager myself but we just got on with it and I don’t think we stopped to think about how huge our responsibility was. I came back to the North as an Assistant Matron and worked in Dr Barnardo’s homes in Washington and Cullercoats, and then Kidderminster, before getting married. Those experiences of the war were all part of my strong desire to help children and I went on to work for Save the Children Fund and then the children’s department of social services.

Even after all of these years I still have a sense of satisfaction for what we achieved back then. 70 years later, I’m still in touch with Barnardo’s. I love reading letters in their magazine about children who went on to have amazing lives – to have brilliant careers and lovely families of their own.”